Sometimes we watch New2day in class, to keep up to date with current affairs and sometimes, we watch it at home. Yesterday, our homework was to watch it at home and write a report on one of the news items. 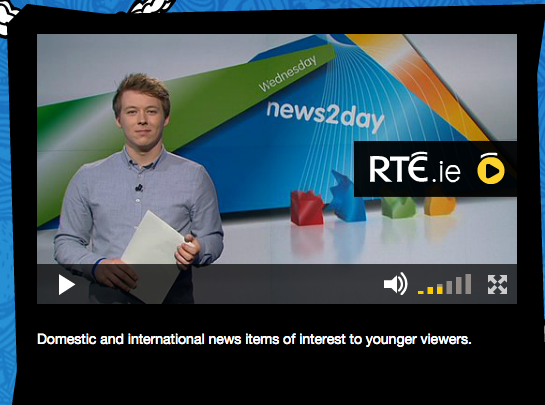 On ‘News2day’, there was a section in the programme about young people learning about 1916. It really interested me as I enjoy learning about the past. Some students were picked to learn about a person, who changed Ireland forever, and risked his/her life for the people then and in the future (like me!) but, they learned about only the people who were not famous (unlike James Connolly or Padraig Pearse.)

It showed a couple names including William Pearse (Padraig Pearse’s brother) who was in the GPO when the whole rebellion was occurring. The person who was learning about him said; “It was very difficult to get information about him, even though he was Padraig’s (very much) lookalike.’’

I thought that having a 1916 piece on a famous news channel like that was a good idea, to get young Irish pupils involved in our history.

By Siobhan (from Siobhan’s blog)

My favourite article on ‘News2 day’ is about some Japanese people doing top of the class archery. They hit arrows with a bow from a long distance!!!! They trained in a tower in Japan. I think they are brilliant at archery.
By Jack (From Jack’s Blog)

My favourite “News2 day’ article is about “What its like to be homeless “. A woman and her husband and her three children had nowhere to go for Christmas day and they stayed in a tiny dirty hotel and it wasn’t nice to be there.

Her children and husband had to eat rolls for dinner on one bed, in what was very small room.

She also said that her children could go swimming or go on games in the arcade.

But they worked for only five months and build 12 apartments.