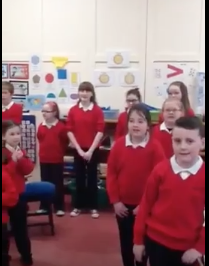 On Tuesday, our classroom split up in groups to make our Jellytot and toothpick construction. In my group was me, Ailish and Amy. 💁
We started off by making 2-D triangles then we built it up and up and it fell a bit apart 🙈 but we managed to fix it using struts to strengthen the structure.
We tried out putting Ava’s huge rubber on it for 10 secs and it stayed on! 👀
When it came time to hold a bowl of 1 kilogram stuff, it slanted and fell! It stayed on for 8 seconds though! 😋
We were proud because who knew that anyone could make a structure using toothpicks and jelly tots?! 🙊 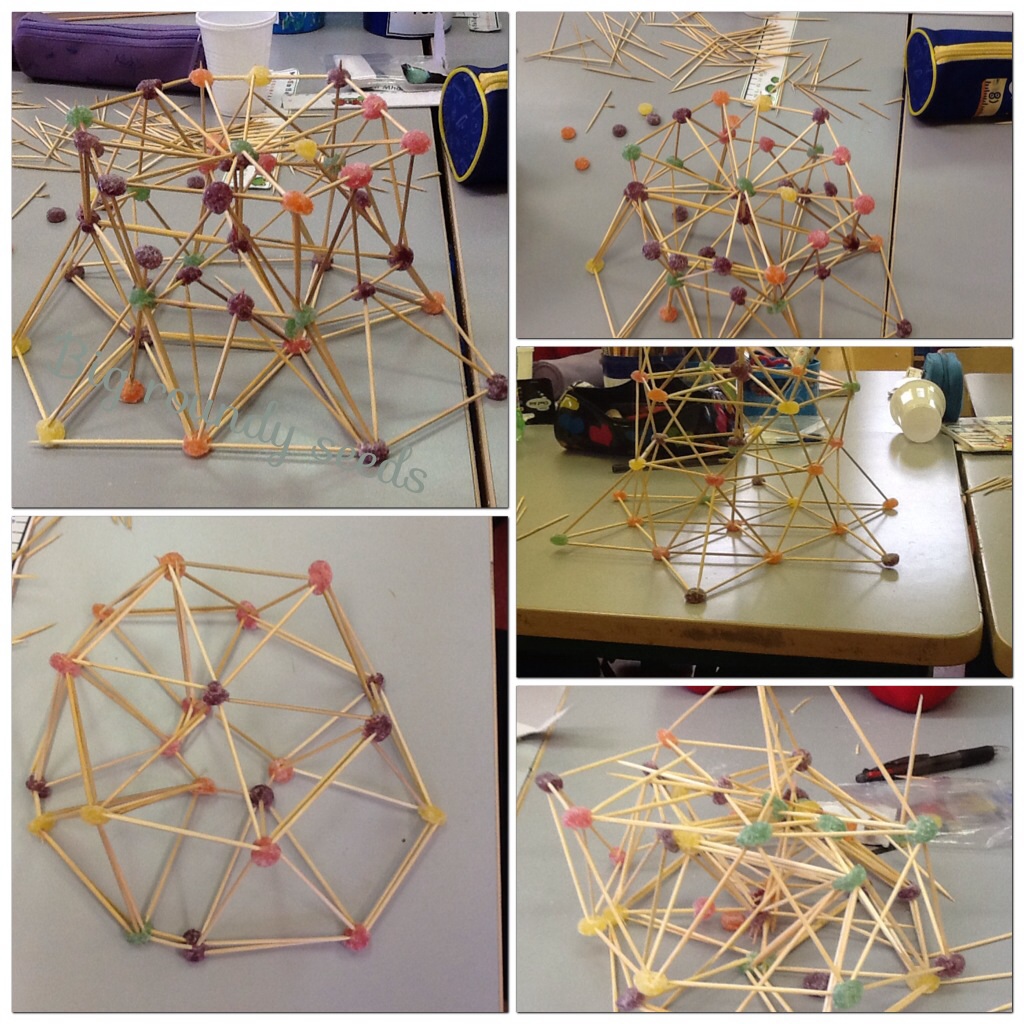 Today, the 14th of November 2014, 3rd, 4th, 5th and 6th class made lava lamps. We started it off by being divided into two groups, the first group would fill their plastic bottles half full with water. The second group would do the same things as the first except instead of water they would fill the bottles with oil.Once that was done we got into our other groups, (the ones for making the lava lamps). Some of us weren’t in groups and some of us were. then the bottles that had oil in them put in water and the bottles that had water in them put oil in the bottles. The oil came to the top of the bottle and the water sank to the bottom.Then everyone put food colouring into the bottles. We had a choice of red, green and blue food colouring. I put in green food colouring. Afterwards some of us put in 1 an Alka Seltzer and let the lava lamps settle while we were out at break. After break the people who didn’t put in an Alka Seltzer put in two of them so they could see how it worked on their bottles. It’s very handy that when we didn’t have the Alka Seltzer we could just turn the bottle upside down and it worked the same way it just didn’t work for as long. It was really cool to see that we could make our own lava lamps with oil, water and food colouring instead of buying a lava lamp! 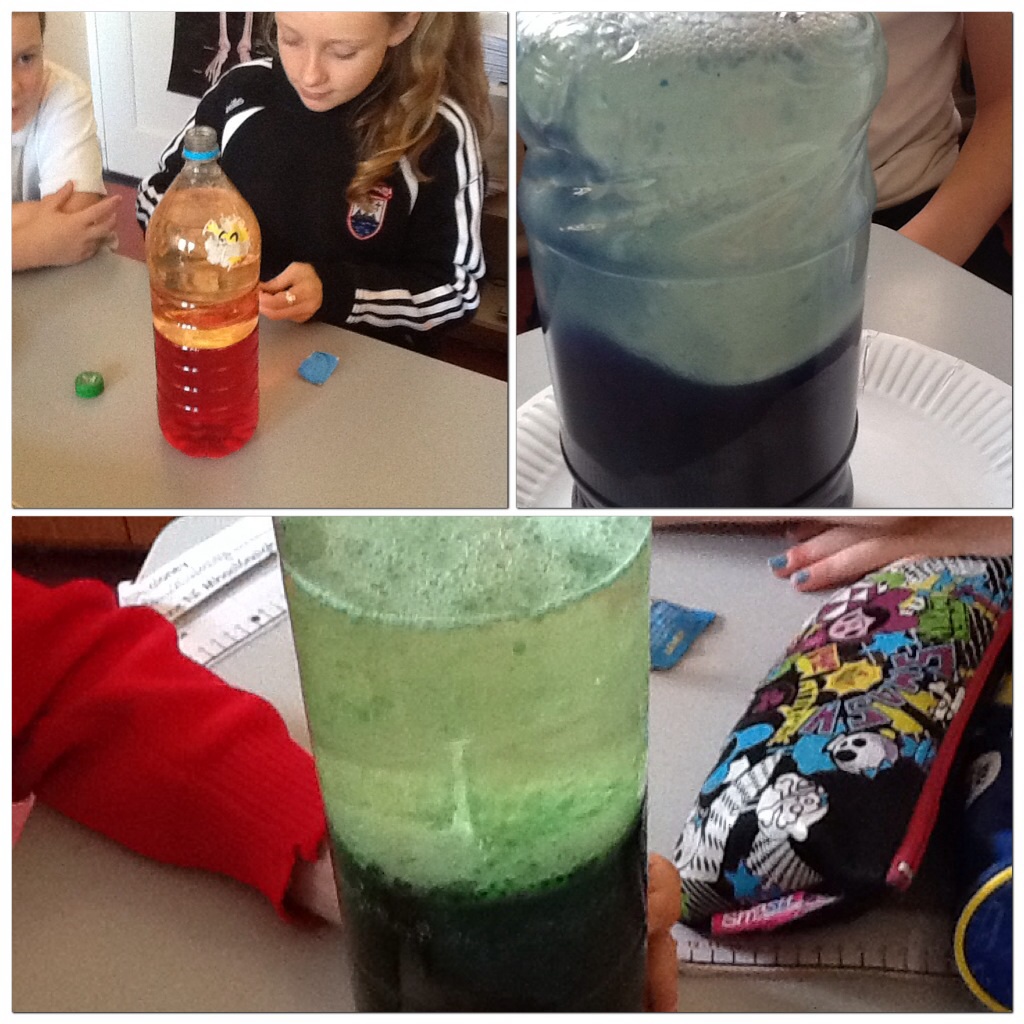 On Wednesday we did an experiment. The experiment was called “tornado in a bottle “.
First we got a plastic bottle,we filled 3/4 of the bottle up with water. We then added a small amount of black current to make the water into a light purple colour. Once we did that we put another bottle on top of the bottom bottle. We stuck that on with duct tape. Once we had secured the two bottles with duct tape we flipped the bottle over and shook it so the water looked like a tornado while moving into the other bottle. It was a great experiment and I really enjoyed it. 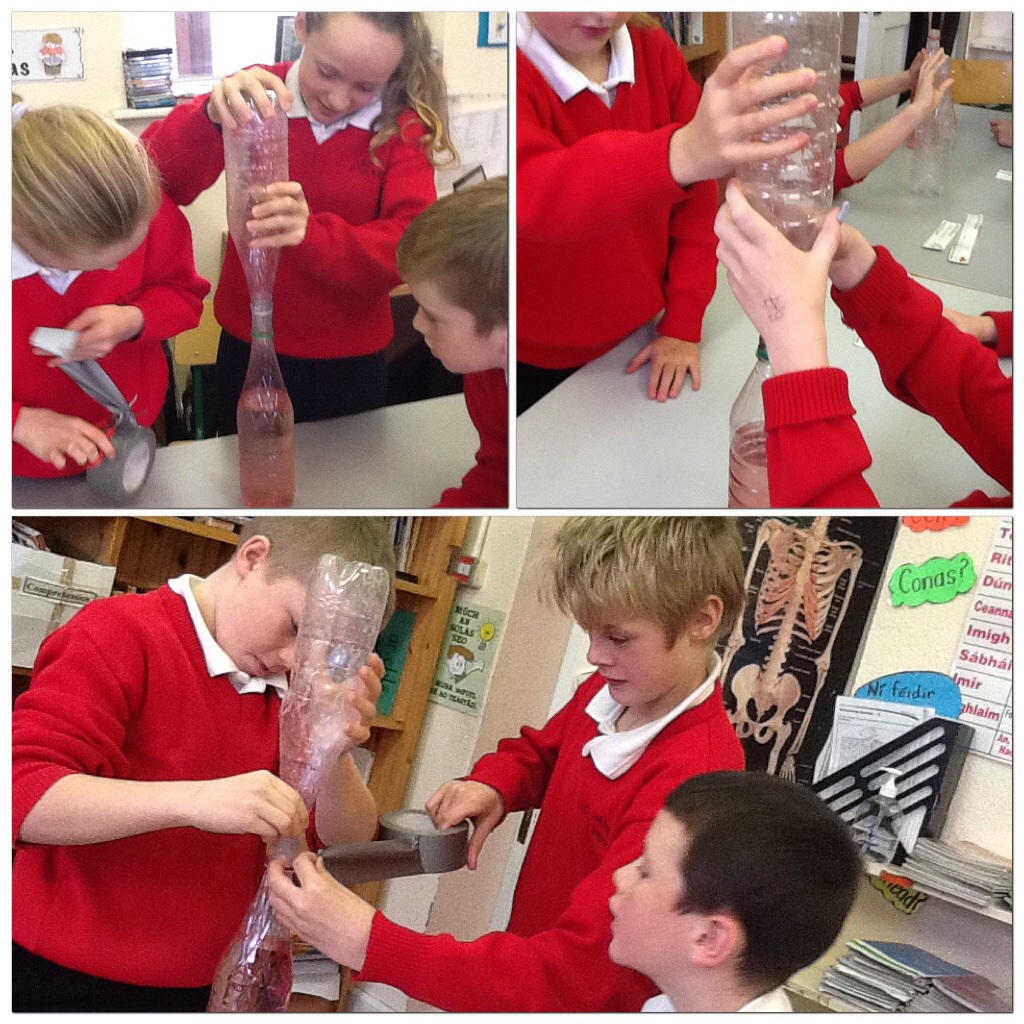 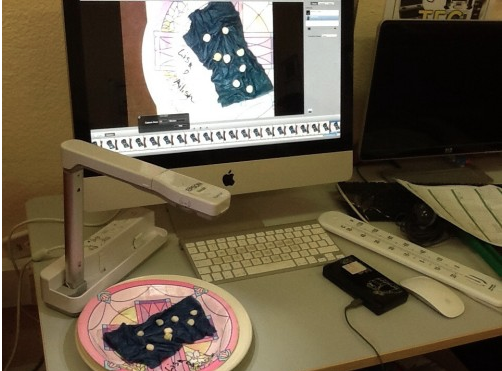 On Monday we began an experiment with germinating peas. We all went in groups.  Abby and I were in a group.

First we got cardboard plates  and some tissue paper. Then we put the tissue on the plate. Then we each placed 8 peas on the tissue then we poured water on it. Our teacher put Ailish and Lisa’s under a web cam. The web camera takes photos every 15 minutes.  There is a pea that has a root comming out of it and the other has a crack in it. On Friday we watched a video of the peas germinating (see below). It was really cool.

The children had so much fun trying out different experiments this week for Science Week. We explored and learned about air pressure, surface tension, electric charge and floating and sinking. The children were amazed by some of the results and were so interested in the science behind it. Here are some photos of our experiments. 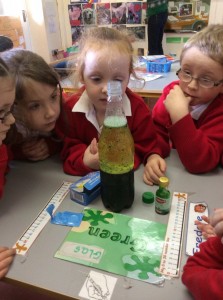 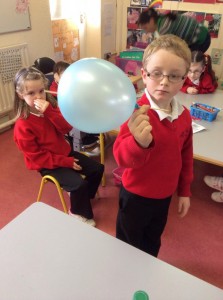 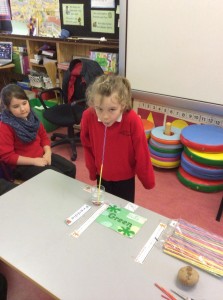 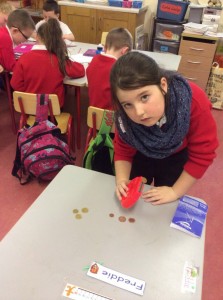 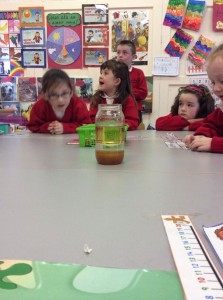 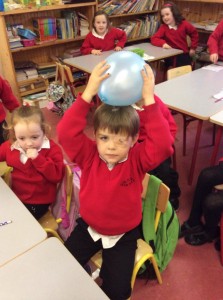 Balloon on a wall