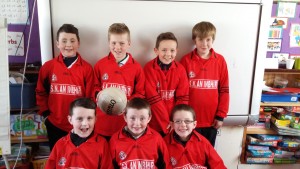 Well done to the Inver N.S. Boys football team who recently competed in the mini 7’s competition in Belmullet. Their first game was against Doohoma NS who were very strong. This resulted in a defeat but not without a good challenge from the boys. Doohoma went on to win the competition so well done to them!
The second game was against Glencastle N.S. Again a very strong team! The Inver boys worked well as a team, kept their head high despite the previous loss and this effort paid off with Inver ahead at the final whistle. We are proud of all the boys. Keep it up!