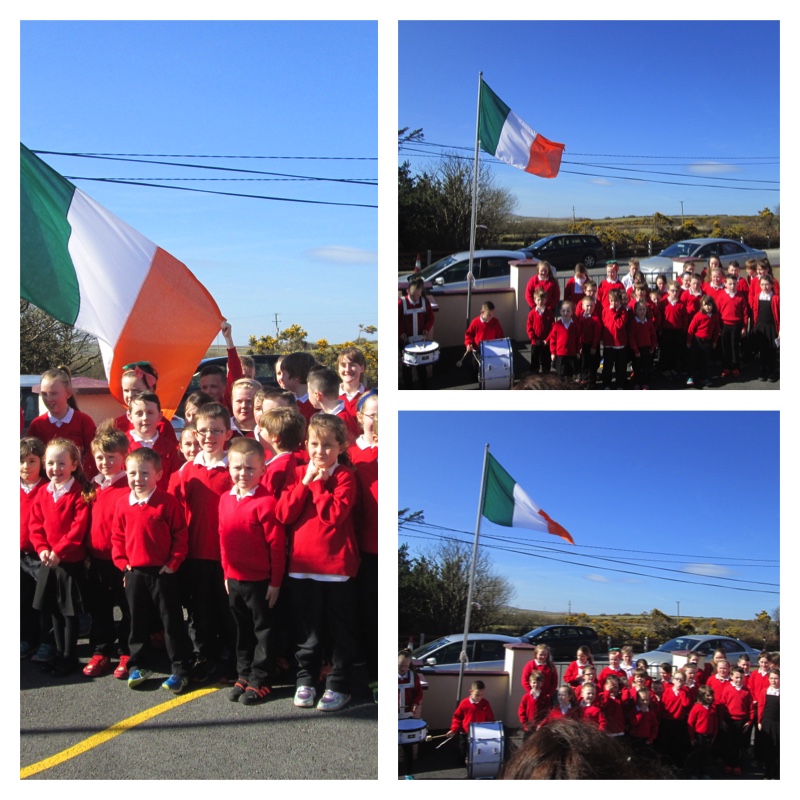 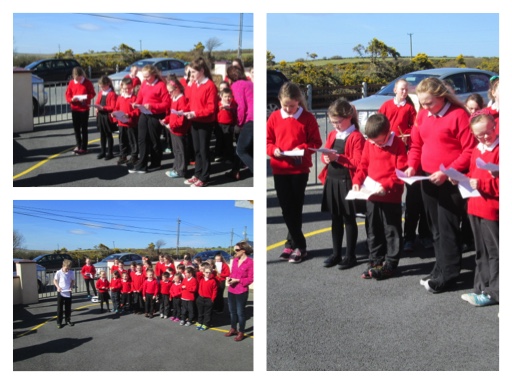 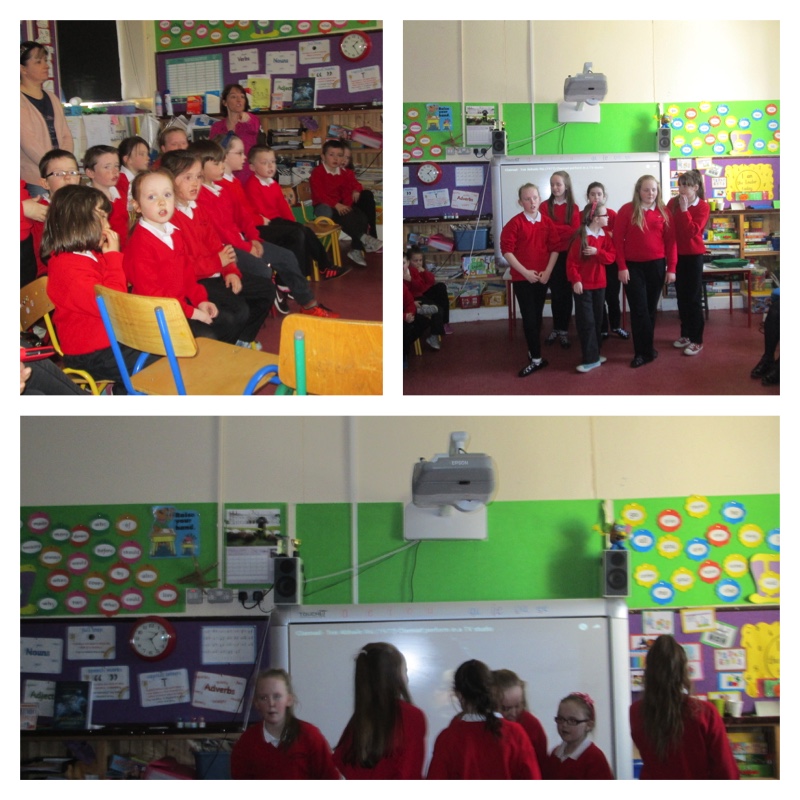 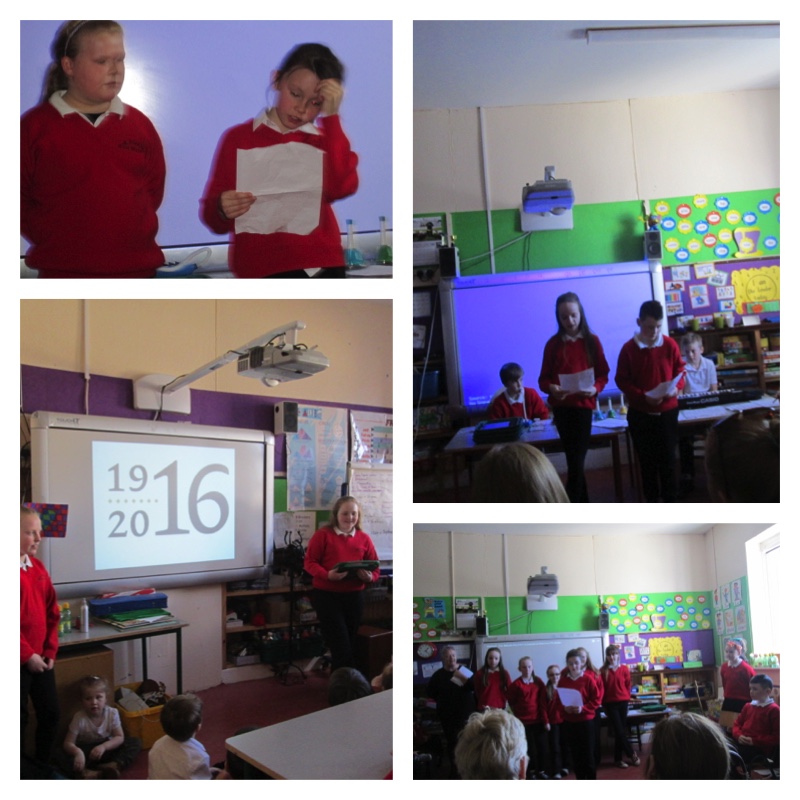 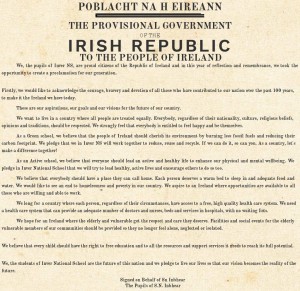 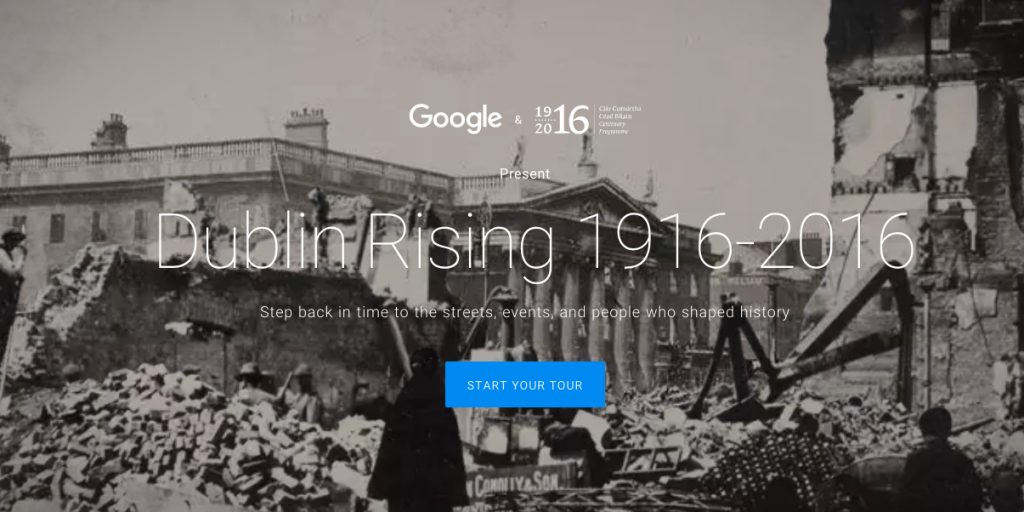 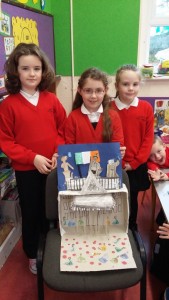 Here are Eve, Aoibhe and Lucy with their wonderful replica of the GPO which they created while studying the 1916 rising. Great job guys! Well done! 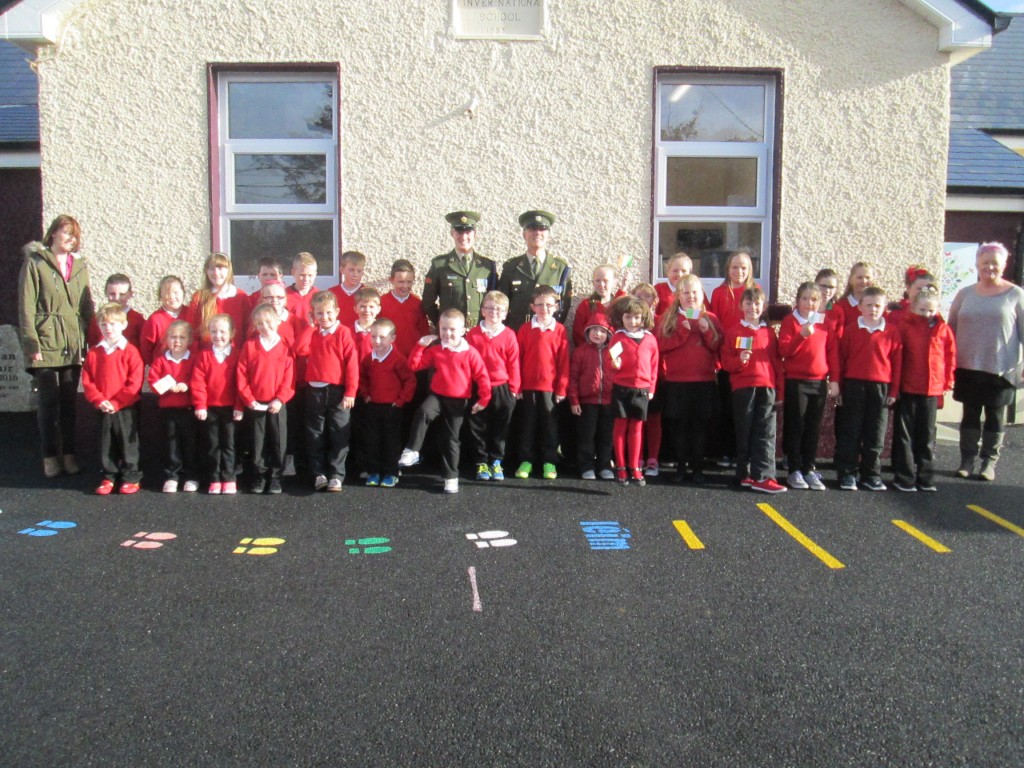 On Wednesday we had a visit from Corporal Des Padden and Seargent PJ Maloney from Oglaí na h-Eireann. For some of you that might not know what “Oglaí na h-Eireann” is it is Ireland’s Defence Force.🇨🇮

When they first came in we played a marching tune on our music instruments called “Fáinne Geall an Lae”. It sounded great and I think Des and PJ enjoyed it!🇨🇮

Next they talked to us about our country’s flag and what it really means to them and what it should mean to all of us! It shouldn’t be dragged around someone’s shoulders as a cape or used as a sign for a football match. It should be hung on the highest pole for everybody to see!🇨🇮

They then talked to us about what they do as soldiers. For example PJ went to Bosnia to help all the children go to school safely when Bosnia was at war. After more talking about what they do, they then awarded us with our national flag.🇨🇮

Des then went through all the rules to keep the flag safe, for example it can’t touch the ground, it has to be hung on the highest pole, you have to take it down every evening and loads more! Also all the schools in Ireland will be raising their flags on the 15th of March 2016 at the exact same time which will be really cool!🇨🇮

It was an honour to have the soldiers award us with the flag and even for them to come to our school. I had a great day and learned so many new things about my country and more! We even got pictures taken with the soldiers!🇨🇮

By Sophie (from Sophie’s Blog)

On Wednesday soldiers from the Irish Defense forces came in to us to give us the national flag. It was good fun👍. Their names were Des and PJ .There was lots of work in this. We had to learn the national anthem and to learn the proclamation as well as play a marching tune on our instruments.

First we looked at the flag. Then Des told us about the rules of the flag. One of them was about not writing on the flag and another was not to wear it like coat.

Lucy was the person to received the flag on our behalf .

Then we talked about our flag and how we got our flag.  Then we asked a few questions and they answered all of them. Then we took some photographs.

It was a great day!

On Wednesday we had a visit from the Corporal Des Padden and Sergeant PJ Maloney from the Oglái Na h-Éireann. Oglái Na h-Eireann is the Defence Force in Ireland.🇮🇪

When they came in first we played our tune called Fáinne Geall An Lae which is a marching tune. Then they talked a little bit about the 1916 rising. After they talked about 1916 we sang The National Anthem. I think they really enjoyed it.

They presented the National flag to Lucy and a book about 1916. They told us that this flag can’t touch the ground or be around you like a cape. It had to be raised on the highest flag pole for everyone can see it.  Everyone took a picture of Lucy and the solders. Then we went outside to take a picture with them and the whole entire school. I really hope they come again.😄. 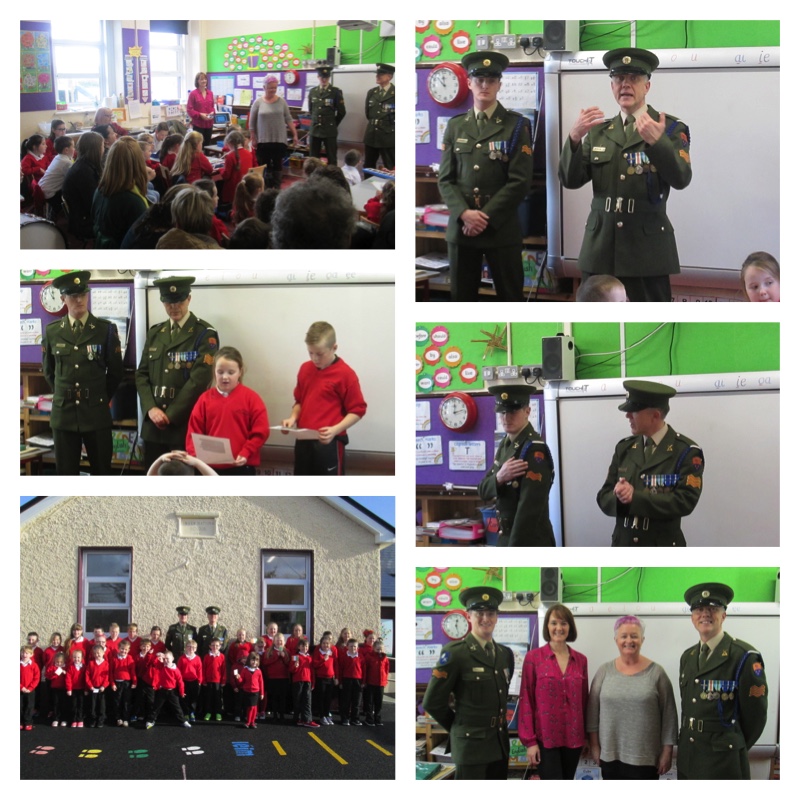 Ogalaí na h-Eireann’s Corporal Des Padden and my uncle Sergeant PJ Maloney came to our school. They gave us a flag which my school and all of the other schools in Ireland will raise on the 15th of March 2016. We must respect the flag and raise it and lower it every day to remember all of those who have lived and passed in the 1916 Rising and also remember those who died in 1916.

The men talked about their uniforms. PJ has three stripes on his arm because he is a Sergeant. Des has only two because he is a lower rank then PJ (Des is a Corporal). PJ has a pin on his shirt because he is a fluent Irish speaker. Des doesn’t have one but he is learning. Des has three medals and PJ has five medals. 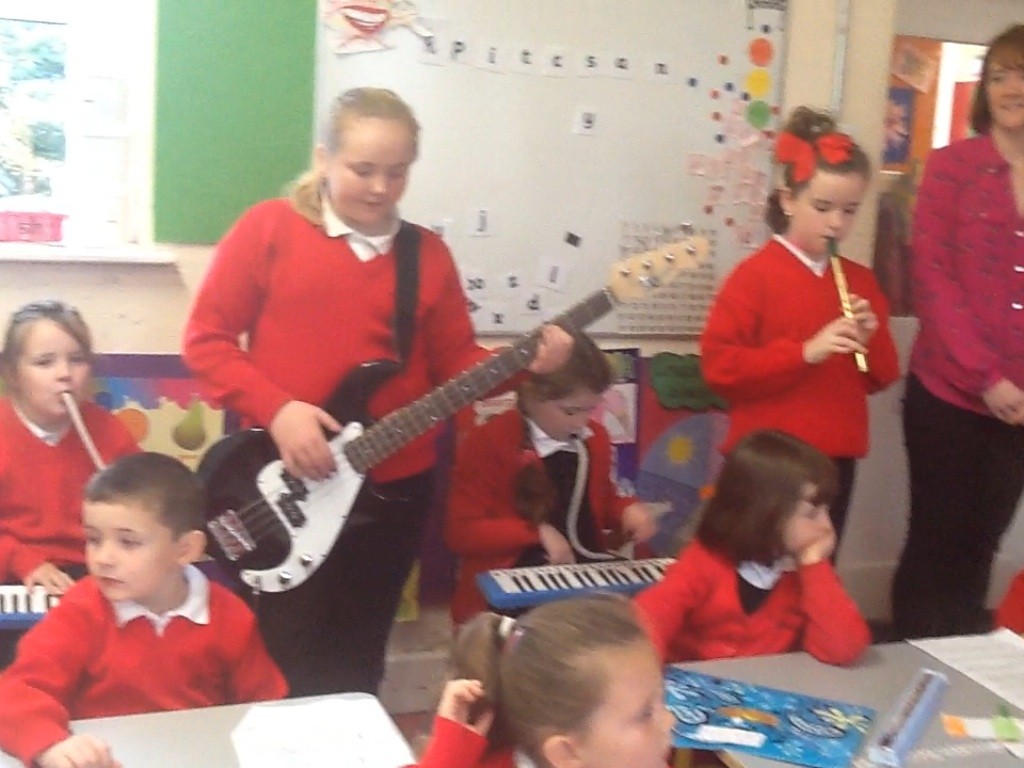